"I went to the woods because I wished to ... see if I could not learn what it had to teach, and not, when I came to die, discover that I had not lived." -- Henry David Thoreau, Walden

I have often referred to my trips into the wilderness as my time for "software adjustment." The high elevations of California's Southern Sierras and, most recently, the White Mountains, as well as locations along the coast have been my most often visited areas that take me to places where nature, as opposed to humans, dominate the envirenment. Such venues are a great source of inspiration and thoughtfulness. 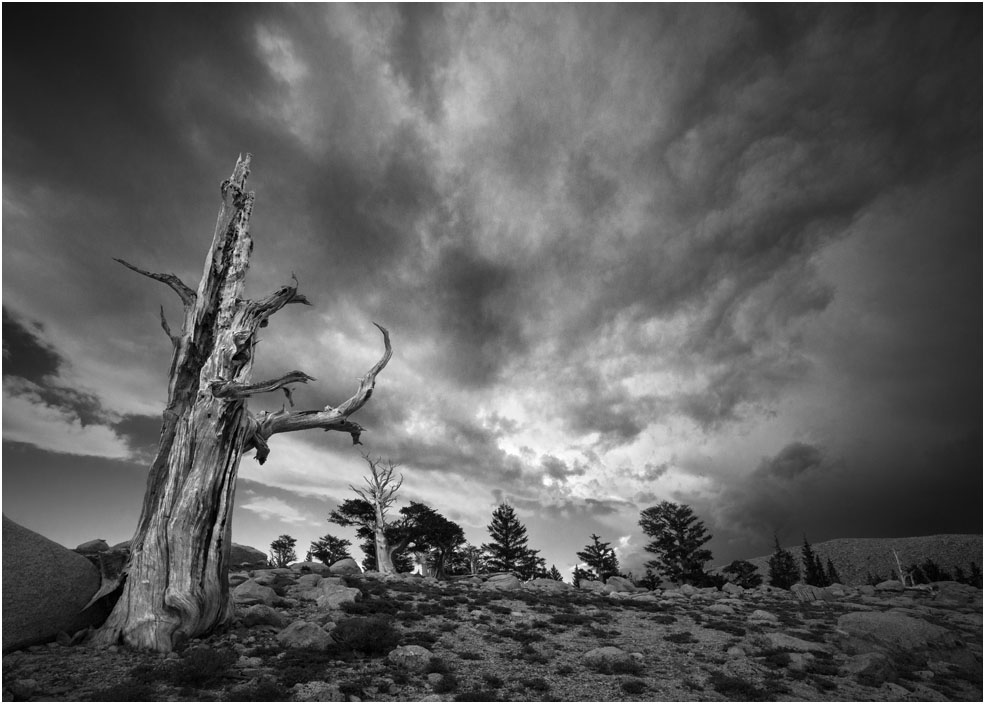 The Foxtail pine snag I call "The Old Man" -- 2015 version
A color image of this tree appeared on the cover of the brochure for my first one-man gallery show in 1981. These old Foxtail pines, relatives of the Bristlecone pine, provide a continuous record of climate data that goes back 4000 years.

I have been backpacking into, mostly, the John Muir and Golden Trout Wilderness areas, since the 1970's. My very first memory is of being lost in Yosemite Valley at age 2 1/2. As a child, my family spent a week in Yosemite Valley and also Tuolumne every year.

For a number of years I have also been involved with the Golden Trout Natural History Workshops, a non-profit, educational organization that offered one-week natural history workshops in the Golden Trout Wilderness, on the southern border of the John Muir Wilderness. In 2019, we had our first session near the top of the White Mountains. This was also our first workshop at a University of California facility. For a general description of these workshops, click here. 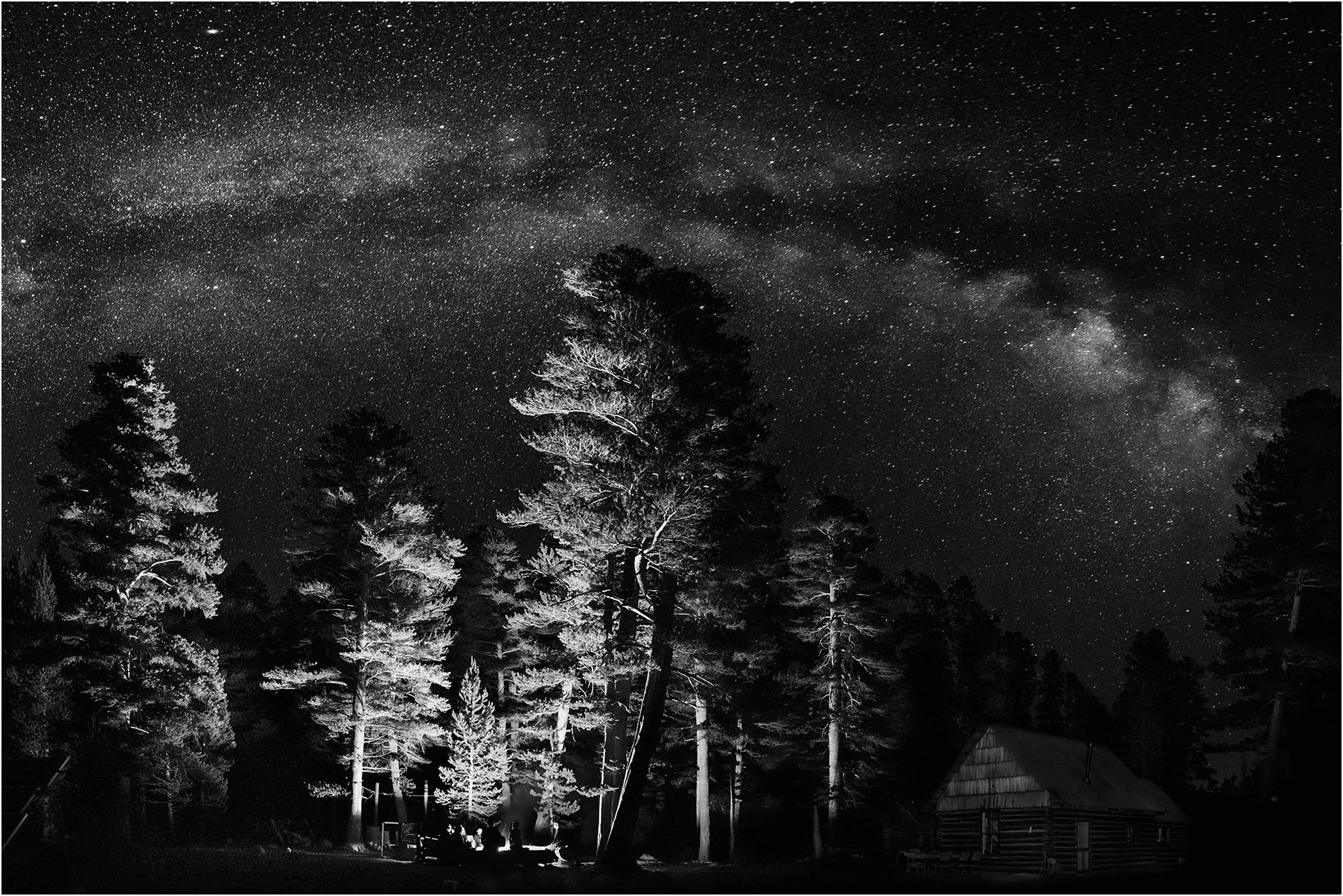 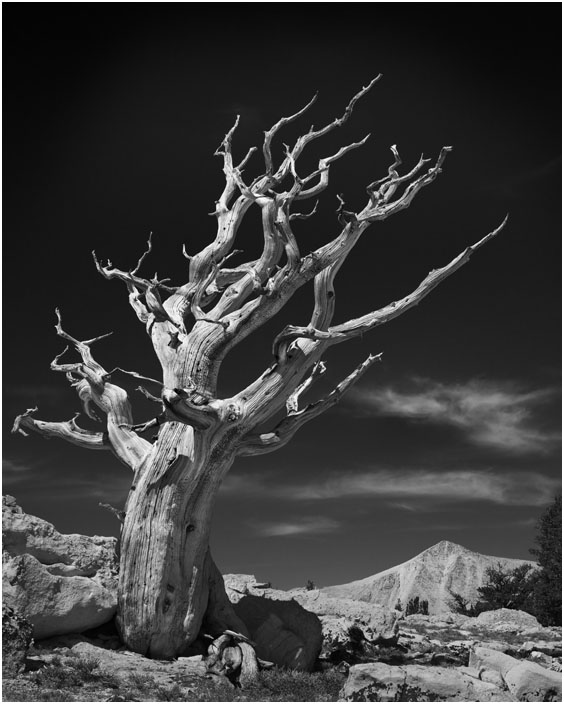 This old Foxtail pine snag appears to be reaching toward the light and warmth of the sun. Taken close to the 2015 Summer Solstice, for the 2015 Winter Solstice celebrations I selected the image for my "Solstice" card, as well as my home page. Thus I refer to it as my 2015 Solstice tree. Above Cirque Peak, in the background, a cloud may be seen by some as having an abstract shape of an angel. 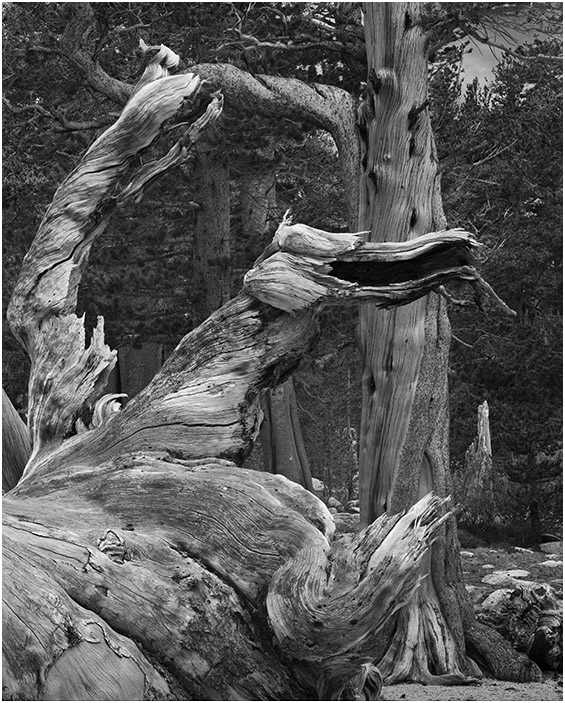 The forest around Muir Lake is full of these fallen giants. 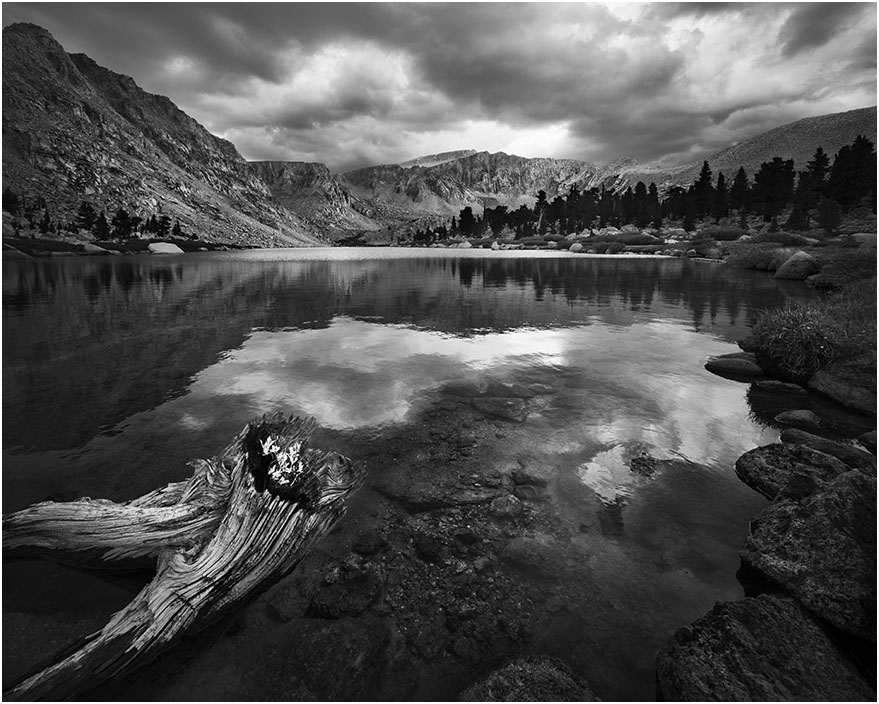 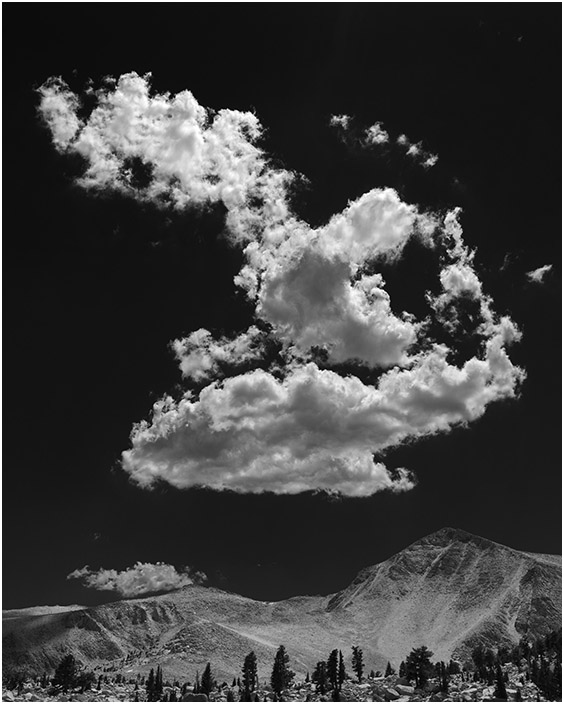 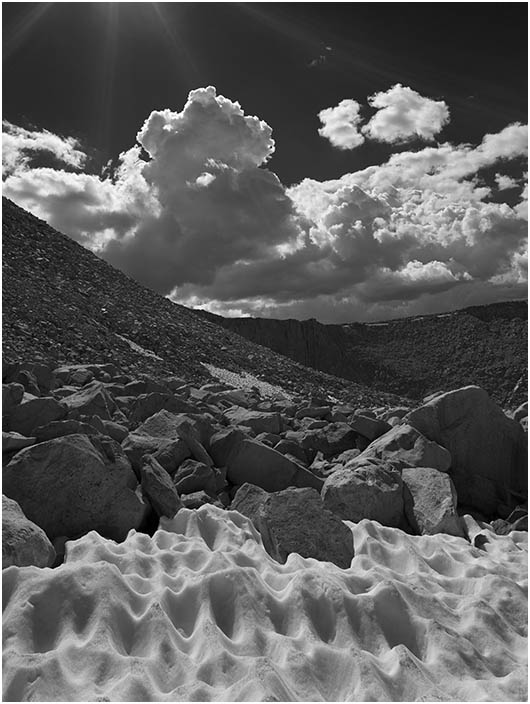 Base of Cirque Peak 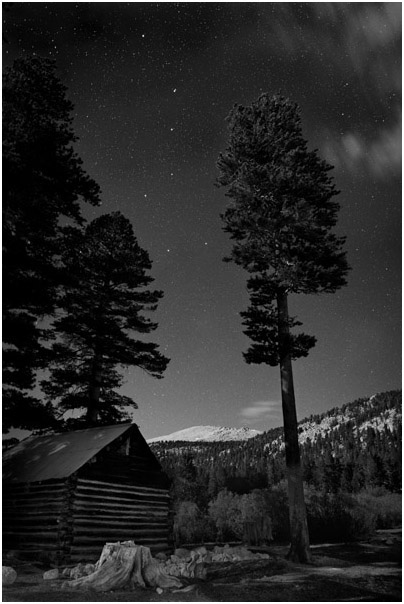 
Mizar and Alcor, the double star that forms the middle of the "handle," is, in fact, a complex of two star systems that each contain multiple stars. I was curious if I could detect their rotation from photos taken 10 years apart. Answer: No way! Their period of rotation around the common center of gravity is 750,000 years. The differences I saw in my photos were probabaly mostly caused by the lack of centering of the stars in my photos combined with the normal rectilinear distortion and angular magnification of off axis objects. 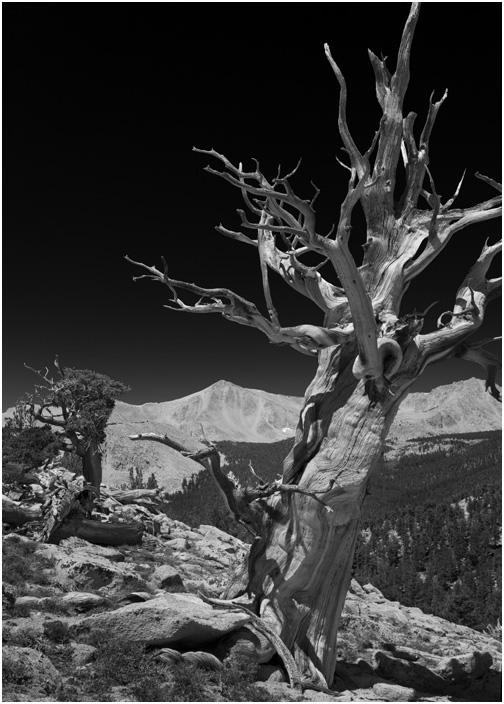 Lakes 4 & 5
Cottonwood Lakes Basin is above Golden Trout Camp. I consider it the furthest south "true" High Sierra lakes basin. Cottonwood Lakes 4 & 5, which are Golden Trout breeding lakes, offer one of the more impressive vistas. Old Army pass is on the left, just above the barely visible Lake 4. Often dangerously covered with snow, it is the shortest route to 14,000 foot Mt. Langley. The top of Old Army Pass is also an area where hikers are treated to a garden of "Sky Pilot" (Polemonium eximium). This image is stitched from 5 medium format Tech Pan negatives, making a file that is about 20,000 pixels wide.

Lake 5
Typical of High Sierra lakes, when the sun first rises the lake is mirror smooth. This 20,000 pixel wide image is also composed of 5 frames stitched in Photoshop.

These old foxtail pines are close to Windy Gap, above the Golden Trout Camp. This shot was taken during the 2007 Photo workshop. 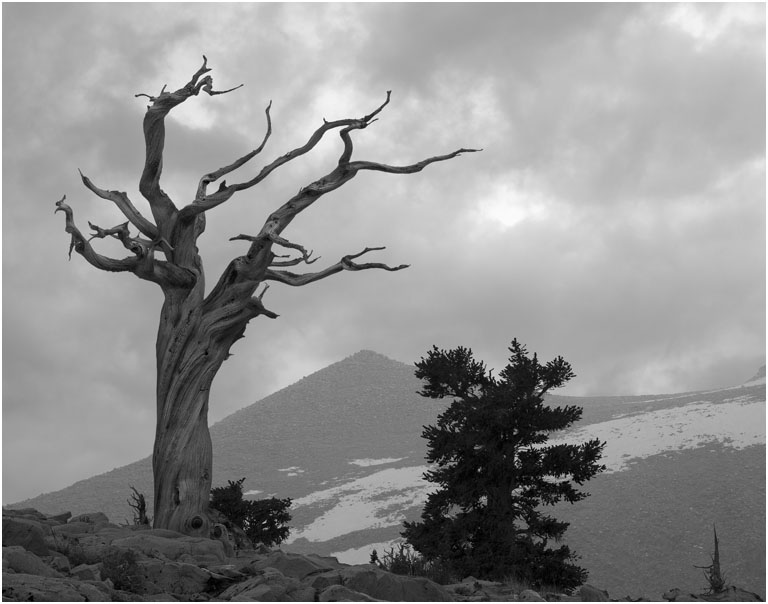 Some Weather at GT

The old snag is on a ridge between South Fork and Cirque Lakes. Although, in the past and in 2006, when this was image was captured, I was using medium format film cameras with tripods, I was very glad to have the digital camera I was testing handy for a fast shot before I became a lightning rod. The resulting image became, in effect, my first serious digital camera photo. 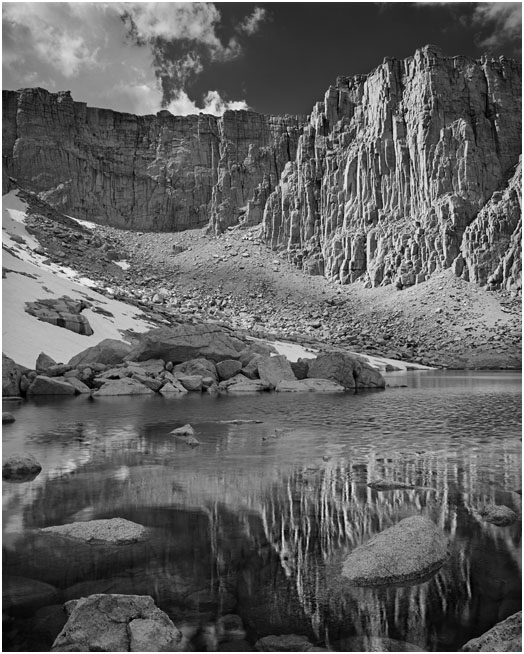 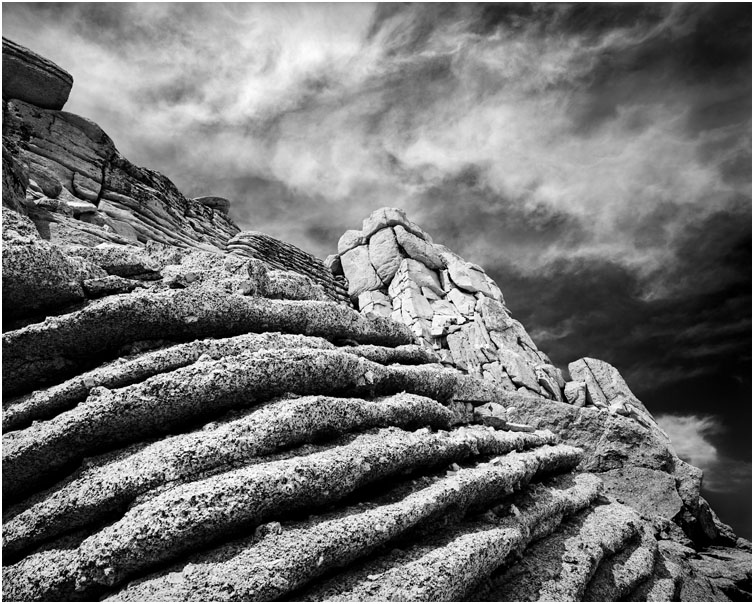 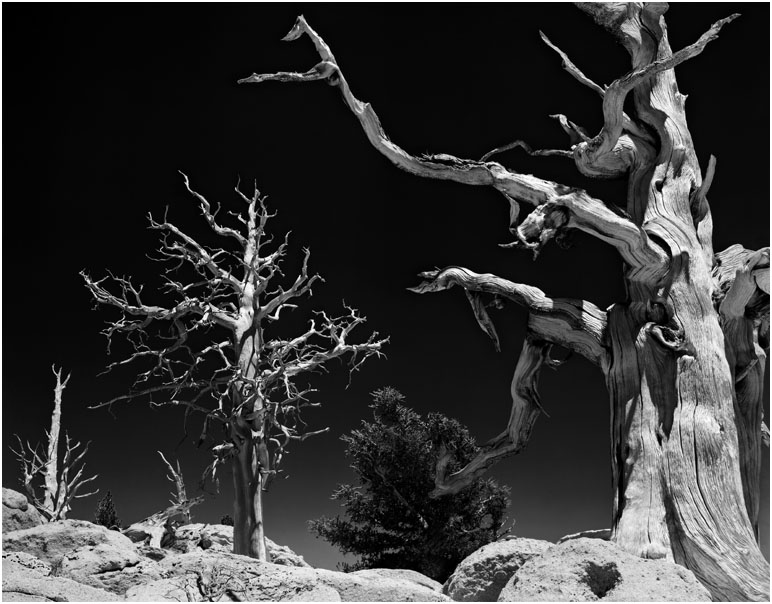 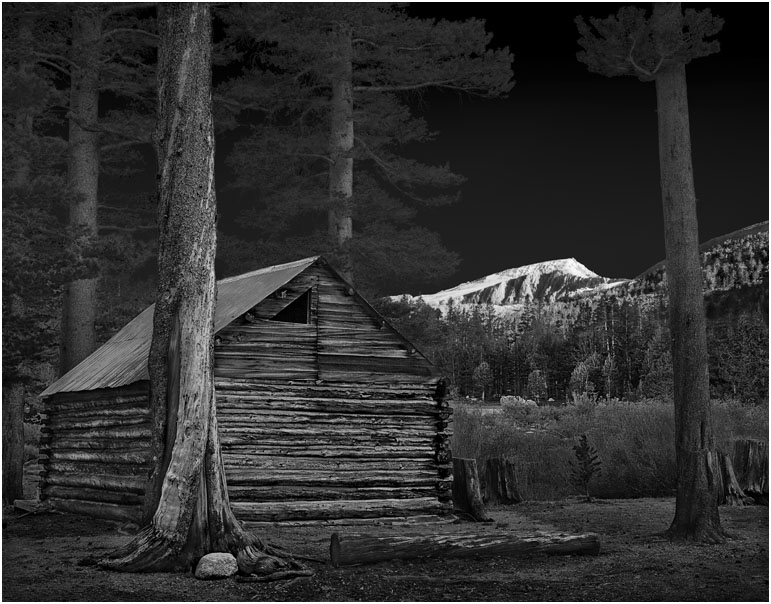 Dawn, Golden Trout Camp, with Mt. Langley in the background 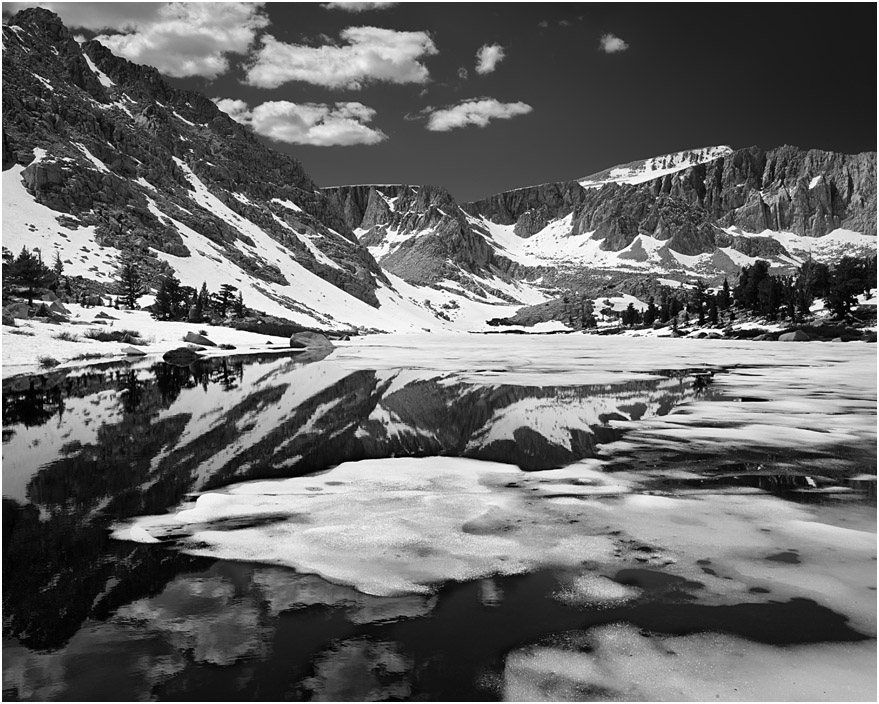 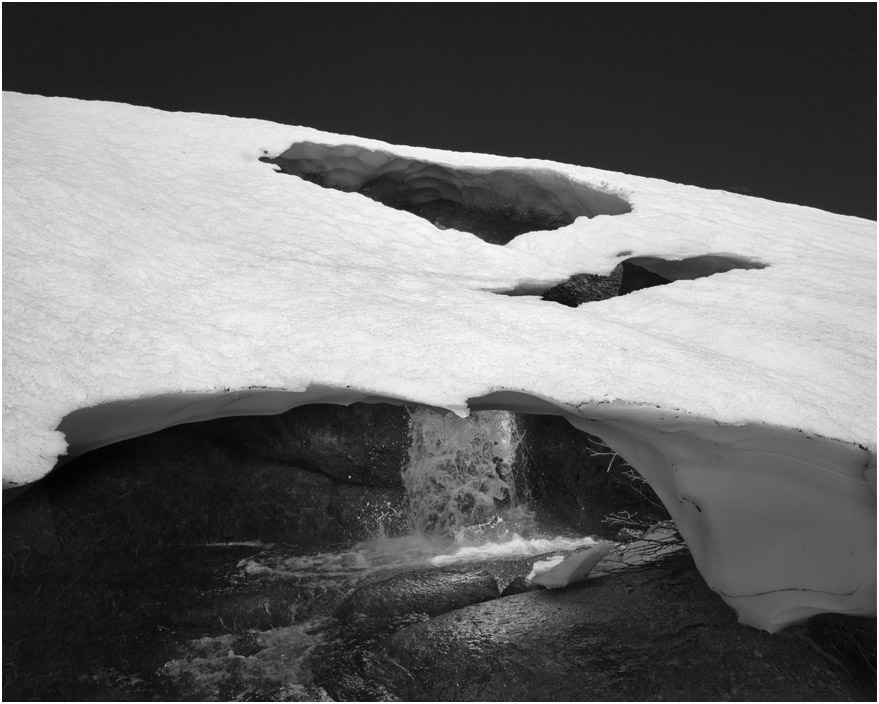 The Cottonwood Creek waterfall flowed through a snow cave in 2011. 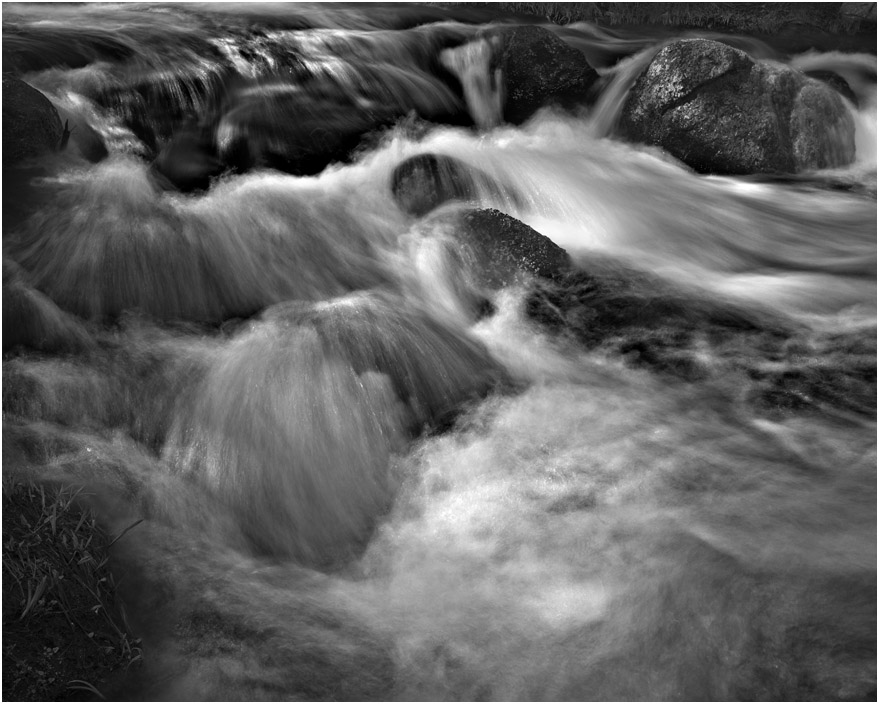 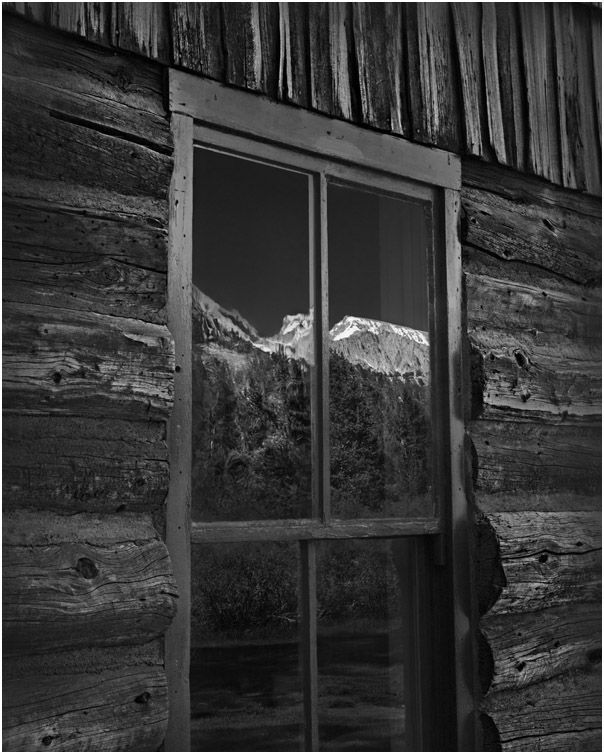 Mount Langley reflects off the dining room window panes, one relatively new and one old and wavey. 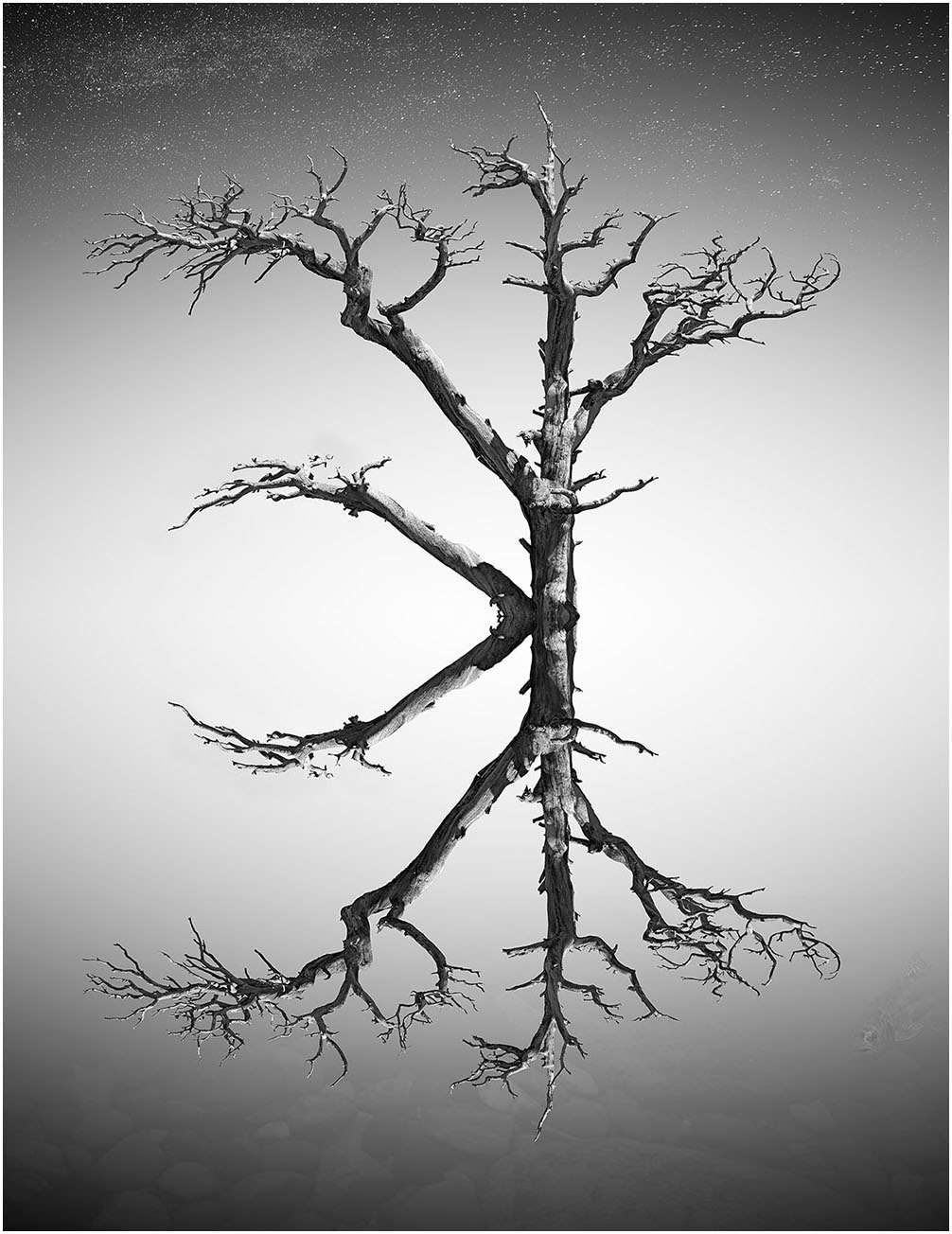 "Foxtail Heaven"
This seems like an appropriate name for this image. The areas around Golden Trout Camp have some of the nicest and highest concentrations of these magnificent old snags. I usually don't do this type of digital manipulation, but here the image seemed to invite it. The composition may tell us something about our reactions to symmetry and fractal patterns.

Information on the Golden Trout Workshops is posted here.